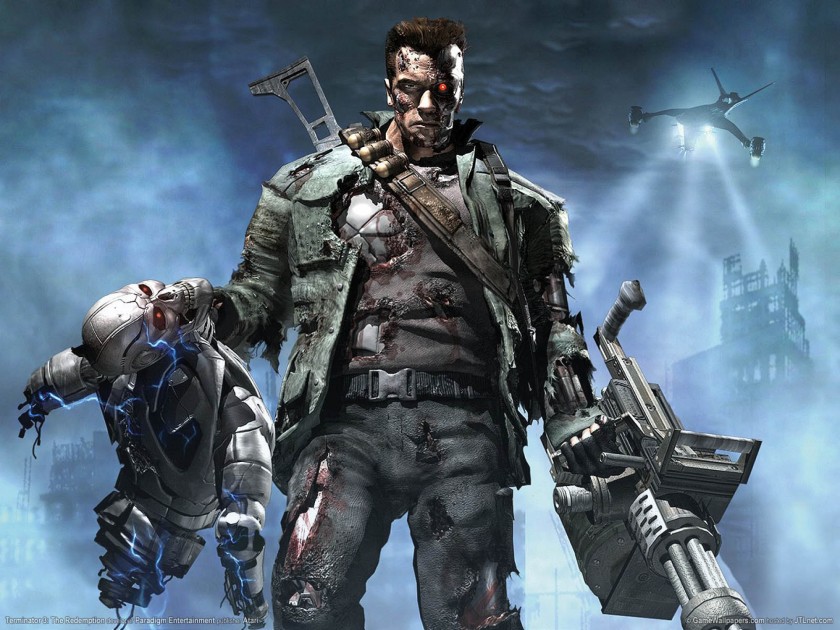 Remember the movie Jurassic Zombieland? How about Star Wars: Attack of the Zombies? Tell me you remember Zombies of the Lost Ark. Well, I don’t remember them either. They don’t exist. However, for a short time in August, I wrote about these fictitious films in my post Classic Films Zombie Style. I wrote about them as a fun way to enjoy Monday Mayhem.

How does it work? Well, I pick a film everyone ought to recognize, then I add a few zombies, amp up the violence, throw in a generous splattering of gore and voilà, you have yourself a zombie classic. Sounds easy, doesn’t it?

Let’s see what Part Two of this series holds for us adventurous hunters of the undead.

Zombienator XVII—Sent from the future, a zombie hunts a boy named John Kenner in an effort to ensure the zombie apocalypse occurs as planned. The eater, an undead beast fitted with an indestructible endoskeleton coated in mimetic polyalloy, hungers vast quantities of human meat. In its mission to find the young man, zombienator leaves behind a vast swath of death and chewed bodies in the wake of its attacks, from one side of Los Angeles all the way to when they first meet. Unknown to the evil maggot bag, another zombienator makes an appearance. This one, as John’s protector. A cat and mouse game ensues until the zombienators clash in a final battle that will determine the fate of humankind. Regardless of who wins, will there be a zombie apocalypse?

Planet of the Zombies—When a U.S. spacecraft breaches the atmosphere and crash lands on what first appears as a uninhabited planet, the astronauts on board have all they can do to escape the destructive inferno. On their trek to find life, they encounter a band of primitive humans grazing in the corn. Without warning, a hunting horn sounds and the humans scatter. The hunters ride on their stallions shooting and tripping snares, capturing the humans as they storm through the cornfields. Within a matter of minutes, the former astronauts discover the riders’ identity is none other than zombie. On this planet, the undead have evolved to become the top species on the food chain, and their plans involve nothing more than to serve human as their main course. Can someone please pass the salt.

Close Encounters of the Undead Kind—Ships from another planet visit Earth with the seedlings of a zombie apocalypse. Their mission to conquer humanity from the inside out propels ordinary citizens into extraordinary actions of courage. Who knew tearing apart a garden would lead to the central headquarters of the alien invasion. Zombies functioning as the aliens’ protectors take to the streets killing all humans who dare stand in their way of total world domination. Only one species will survive, but the aliens may have underestimated the zombies’ ability to yield to their commands. No one knows who will win.

What classic movies would you like to see done with a zombie makeover?

What Did Jesus Drink While Dying on the Cross?
His Name Is Above All Other Names
God Is Our Loving Father
Believe in God’s Promises
He Is Our God Who Will Help Us
Thanks Be to God
Love for God’s Word