July 1, 2019 – Jack Flacco will be leading worship at Victory Baptist Church in East Gwillimbury on July 14, August 18 and September 1. All are welcome!

November 19, 2018 – GOD IS LOVE: COMFORT THROUGH TRIALS is available for download now.

March 7, 2018 – On Sunday, March 11, Jack Flacco will be delivering a special message to Newmarket Youth entitled Leadership in the Ministry.

February 14, 2018 – Jack Flacco will be speaking at New Hope Methodist Church in Newmarket on Sunday, March 4. Title of the sermon will be My Peace I Give to You.

February 12, 2018 – On February 18, Jack Flacco will be delivering a special message to Newmarket Youth about desensitization in our walk with Christ.

October 29, 2017 – Jack Flacco will be speaking at New Hope Methodist Church in Newmarket on Sunday, November 5. Title of the sermon will be Forgive as God Forgives.

October 24, 2017 – WHEN FORGIVENESS IS ENOUGH: MAKING SENSE OF GOD’S CALLING is available for download now.

When the apostle Peter asked Jesus how many times he should forgive his brother, Jesus answered seventy-seven times. This was to illustrate God’s forgiveness is boundless, without end. A week after that conversation, God gave his only son as a sacrifice to save many from the penalty of sin.

What would it be like to forgive as God forgives? Is it possible to erase from memory someone else’s slight, in spite of the lingering bad feelings brought on by bitterness?

God’s calling to forgive one another is just the beginning. His desire is to overwhelm people with his spirit so that a hardened heart may melt to become loving and generous. Above everything else, God wants a relationship with every person who hears his word. In this practical guide, Jack Flacco recounts the events that led to his transformation and explores techniques that has allowed him to overcome hatred, envy and resentment.

When Forgiveness Is Enough: Making Sense of God’s Calling, on sale October 24.

July 23, 2017 – On July 30, Jack Flacco and his son will be delivering a special message to Newmarket Youth entitled Hearing God’s Voice. 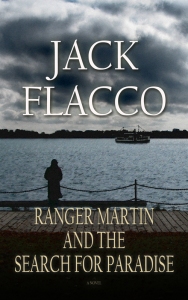 There is no cure. The change is permanent. Whoever says they can fix this is wrong.

Months ago, billions of people died in the zombie apocalypse. The survivors either have become refugees looking for a way out or have turned against each other. No one will admit they killed their friend for a package of raisins. It happens though, and there isn’t anything anyone can do about it.

That is, until now.

When the military lays siege on his silo, Ranger and his crack team of professionals—a bunch of kids, really—have no other choice than to run. But after he discovers a map that may lead to a mythic city called Paradise, where neither army nor zombie can invade, Ranger mounts a cross-state journey to find the place of safety before the others find him and it’s too late.

Ranger Martin and the Search for Paradise, on sale October 20.

May 4, 2015 – Jack Flacco is proud to announce RANGER MARTIN AND THE SEARCH FOR PARADISE, the final book in the Ranger Martin trilogy, will publish on October 20.

January 5, 2015 – Coming this fall, the final book to the Ranger Martin trilogy.

In a cold cemetery just outside American Fork, Utah, zombie slayer Ranger Martin sets his trap, four gas drums strung together and the barrel of his shotgun acting as the fuse. The undead crowd erupts in a blaze of body parts. If only all of Ranger’s enemies would die this way. What Ranger doesn’t know is his greatest foe may not be a hungry horde after all, but a vicious fiend bent on destroying the planet.

They came from the sky. No one knew what to call them. By that time, it was too late. The dreaded lights from their ships plunged the world into darkness and everyone from Oregon to Virginia had disappeared. Now, with the towns and cities empty, no one will be able to stop the invaders’ brutal assault on the survivors. That is, no one except for Ranger Martin and a group of young tagalongs eager to once again reclaim the globe as their home. Together, they fight the elements, kill alien and zombie alike, and liberate the weak from their military oppressors. But will Ranger have enough time to defeat another wave of silver ships screaming toward Earth before it delivers its fatal payload? Or will he succumb to the whims of a sadistic, power-hungry general obsessed with eliminating anyone threatening his plans?

Ranger Martin and the Alien Invasion, on sale October 21.

May 5, 2014 – Jack Flacco is proud to announce RANGER MARTIN AND THE ALIEN INVASION, the second book in the Ranger Martin series, will publish on October 21.

Never call them zombies. That was one of the rules. So much for rules, everyone who made up that garbage is either dead or undead. It doesn’t matter anymore. They go by other names—chewers, eaters, maggot bags, the changed. Whatever they’re called, they’re everywhere. And they’re not giving up until every last human becomes a single serving entrée to satiate their uncontrollable appetite.

Enter shotgun-toting Ranger Martin who is determined to end the zombies’ all-you-can-eat buffet. In an abandon military silo on the outskirts of the Nevada/Arizona border, he and his specialized team of assassins plan their assaults. Who’s he kidding? His team consists of three kids in their teens, and a boy barely old enough to wipe his own nose. But when a secret air force base in the Mojave Desert proves there’s more to the change than anyone knew, the temptation is too great. Now Ranger and the others set out on the road to overthrow the center of the infestation—a frantic race that will either destroy the hunger-prone zombies or cost him and his friends their lives.

Ranger Martin and The Zombie Apocalypse, on sale October 22.

May 6, 2013 – Jack Flacco is proud to announce RANGER MARTIN AND THE ZOMBIE APOCALYPSE, the first book in the Ranger Martin series, will publish on October 22.

December 17, 2012 – Jack Flacco: The Official Site goes live. Featuring articles, photos and resources, the site promises to deliver a different viewpoint to the now-popular belief of a Zombie Apocalypse. Also featured, detailed writings of the post-apocalyptic madness that will grip the world, super female role models, and odd ramblings. All this and more in the coming months as Flacco readies his zombie book series for a Fall 2013 release.