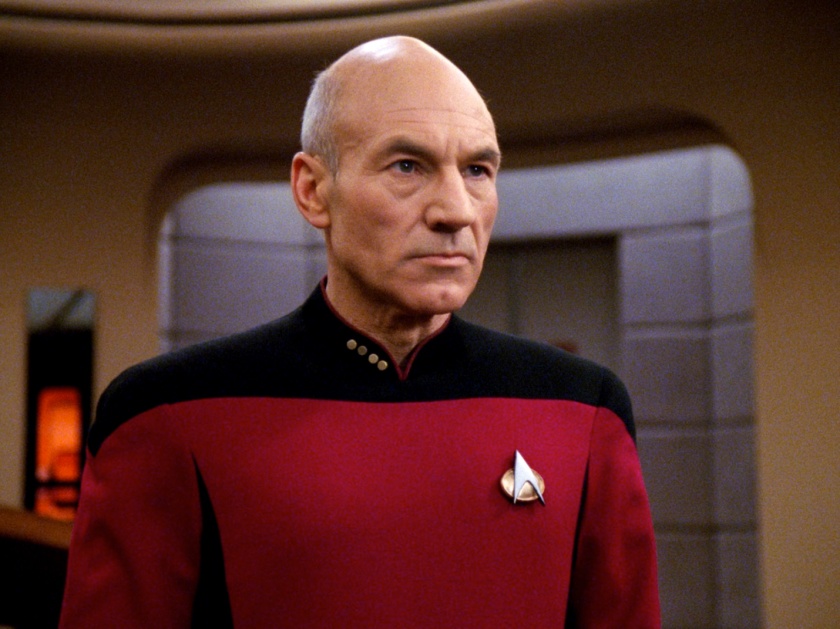 There isn’t a Star Trek episode I haven’t seen. There isn’t an actor from the multiple series or of the many movies who I don’t know their name. I grew up with Star Trek. I love the idea of universal peace and a Prime Directive that includes not interfering with third-party affairs. The technology may look dated, but the overall ideas remain valid even today. Can anyone argue that the idea of the tablet and cell phone did not come from the series?

For today’s Wednesday Warriors, I would like to take a few minutes to talk about Jean-Luc Picard (Patrick Stewart), captain of the U.S.S. Enterprise.

When Captain Picard took the helm of the newly christened U.S.S. Enterprise, he knew he had a crew capable of great things. For instance, his first officer William Riker (Jonathan Frakes) graduated Starfleet Academy with the ability to navigate a starship into a manual dock. The second officer, Commander Data (Brent Spiner), an android, can do what humans can’t do, but wishes he could become human nonetheless. Counsellor Deeana Troy (Marina Sirtis) is equally amazing as Jean-Luc’s telepathic aid. She has rescued the captain on more than one occasion by sensing the feelings of others. Then there are the other crewmembers that although they may occupy side stories, play an important role in the Captain’s compliment.

As for Captain Picard, his focus is on the Prime Directive. The rule simply stipulates that no member of Starfleet shall interfere in the domestic policies of societies or civilizations, no matter how primitive or advanced they are. The rule also prevents the captain from interceding on behalf of a weaker civilization, should the threat of war mean the extinction of their entire species.

Picard abides by a strict code of ethics that other captains would do well to adopt. Characteristics such as loyalty, integrity and honor are the captain’s currency for a disciplined life. Part of his duties is to instill a sense of confidence in his crew in order for them to act in accordance with their pledge to his leadership.

I can think of two examples that would emphasize Picard’s ability to lead.

First, the captain and Riker become prisoners of Bynar, aliens that have melded their intellects with computers. They have captured the ship and Picard enacts his right not to allow the ship to fall into the Bynar’s hands. Riker didn’t have to think twice. Realizing he would die, he follows the captain to take action against the Bynar threat by enabling the vessel’s self-destruct sequence.

Second, has all to do with how the captain takes a young ensign under his wing and rears him as his own son, leading his growth, which eventually leads to a placement into Starfleet Academy. Often times, Picard appears as a totalitarian, but it is necessary since his goal is to train the boy Wesley Crusher (Wil Wheaton) in the way he should go.

There are other instances I could use to show how Picard as a leader, but I’ll save it for some other time. For now, I’ll leave you with the this thought:

If there was no Star Trek, do you think we’d have cell phones or tablets?

Are you a fan of Star Trek? What do you think of Jean-Luc Picard?