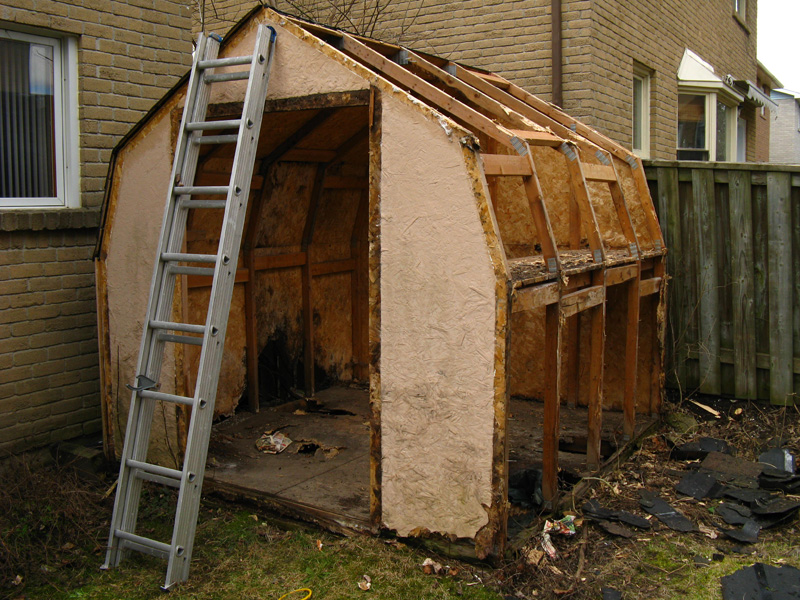 The other weekend I was tearing down the shed in our backyard and realized along with the sweat, sore muscles and tender hands gained, I was also learning a few lessons along the way. As part of my Freedom Friday series, this is what I’ve learned.

Tearing down a shed sounds like an easy task to accomplish. The instructions couldn’t be simpler:

Simple. Right? Not so much.

First, the shed’s composition consisted entirely of wood, reinforced with four-inch planks, fastened together by two-inch nails that in case of a meteor assault the roof would not cave in. Second, I needed more than a hammer to take the beast down. I needed a Bobcat utility vehicle. Since I didn’t have one of those I settle on a three-foot crowbar complete with a hook that would withstand a massive beating from my hands. Last, this was not a weekend activity. I ended up taking half of it down on the weekend, leaving the rest for the week ahead.

As I was working, my brain wandered on silly things. The shed I once admired for many years had fallen apart. It deserved a final resting place before replacing it with a newer and shinier version. Similarly, there are things in my life I’ve had to remove in order to push forward. That meant replacing the bad with the good. Habits are like that. I wrote about toxic perfectionism a year ago. I had to tear apart my inner being as a means to throw away that which was causing me the greatest stress. Eventually, that old part is now gone, tossed in the dumpster. And like the shed, where I can still see bits and pieces of it littering the spot where it once stood majestically, the old self, the one wanting things in a perfect, organized box, appears every so often to remind me of the way I had once viewed life—through the doors of a rotting shed.

I also learned that with much banging of a crowbar on an immovable object, the energy I had expended needed replenishing. Drinking water. Sitting in the shade. Wiping the sweat from my brow. They all contributed to that replenishment. Again, as it is in life, I’ve had to take time away from the day-to-day grind in order to replenish my soul. Every Saturday, I disappear from Social Media and spend time with the family doing real things such as enjoying a special meal together or visiting with family and friends. Facebook, Twitter, Instagram, this web site can all wait until I return online on Sunday. Saturday is mine to rest and do what I want. If I didn’t do that, then like tearing apart the shed, not taking a water break or rest in the shade, I’d collapse with a guaranteed stroke. I don’t know about anyone else, but I’d like to think I have a lot more to accomplish than make my final resting place six feet under way before my time.

My final lesson I had learned that weekend is to be patient and never give up. No matter what. Slugging the crap out of a shed wall took every ounce of energy I could muster. At times, I wanted to toss the crowbar and forget about the whole thing. I stuck to it. Every hit was one hit closer to success. Every drop of sweat was one more fraction of determination spent. I would not let failure overcome my ambition to slay the beast and win the battle.

The shed died a slow death, but I learned so much from the experience. I’m sure once I raise the new shed I will also have learned something interesting about life I never knew before.

Have you had something you were doing from which you learned a lesson? What is it about life you find the most fascinating of all?

8 thoughts on “The Shed”

Turn to God and Be Saved
What Did Jesus Drink While Dying on the Cross?
Hope in God
God Will Rescue Us
Believe in God’s Promises
Our Hope Is in God
Worship God Alone