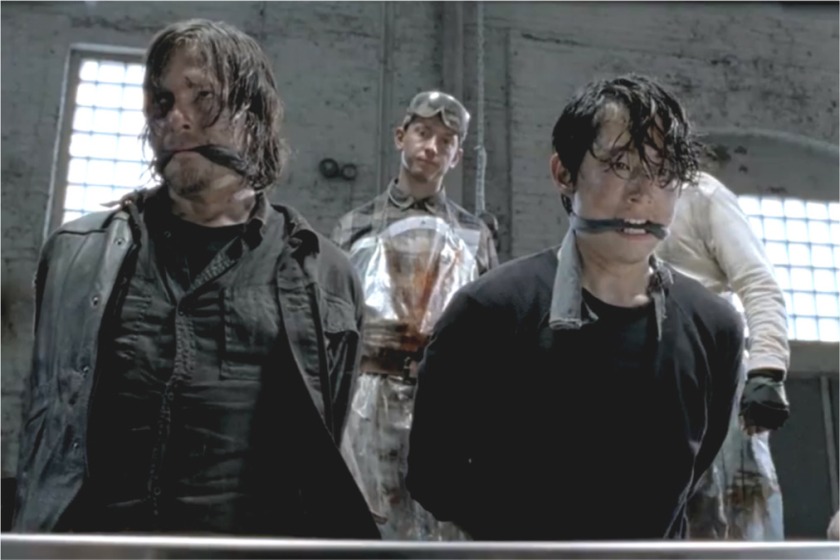 Terminus. Bent over a trough with their hands tied behind their back, they await their fate. A baseball bat to the back of the head. Their throats slit. Another episode of The Walking Dead makes a debut.

For today’s Monday Mayhem I would like to talk a bit about the level of violence in The Walking Dead. Why is it there? And—is it necessary?

If you have followed The Walking Dead for any length of time, you will know the show has gone through a transformation of sorts that, for lack of a better cliché, has pushed the envelope of dramatic series television. Season 5’s premier episode caught viewers off-guard with one of the most brutal scenes ever depicted on the small screen. If a phrase ought to typify the episode, it would be this one: “You’re either the butcher or the cattle.” If the viewer thought they had seen it all in the final episode of Season 4, they had miscalculated the show’s ability to deliver an even more shocking story.

You see, up to that point, the violence had always centered around the undead ending up splattered all over a wall or torn apart from gunfire. Humans receiving the brunt of their destruction typically came from walkers searching for food. That is until the absolute terror-inducing scene in the slaughterhouse of Season 5’s premier. It was then the viewer realized just how cruel a human could be toward another human.

The increasing level of viciousness from season-to-season attests to one thing the show has accomplished well—depicting that humans left to their own devices will kill without mercy.

The violence in The Walking Dead has become a symbol of what society would be like should an actual apocalypse take place. Brother will turn against brother. Hatred will spawn more hatred. And the concept of family will extend to those who will come to the aid of the less fortunate. If it sounds pessimistic, you’re right. But if you caught that last sentence, there will always be those who will not succumb to the human compulsion of killing. They are the ones who will make the world a better place.

Does that sound idealistic? Perhaps. But who’s to say how it will all play out until it actually happens? All I know is in every disaster, there are heroes.

And the heroes are the ones who will make a difference.

What do you think about the violence depicted in The Walking Dead? Have you had any nightmares yet?

15 thoughts on “The Walking Dead: Violence”

God Is for Us
What Did Jesus Drink While Dying on the Cross?
Believe in God’s Promises
How Awesome God’s Deeds Are
God Will Rescue Us
He Will Reveal His Glory to Us
The Lord’s Love Endures Forever