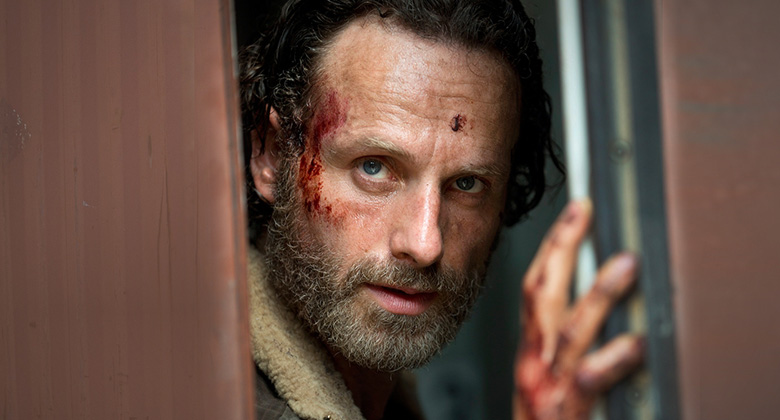 He awakens from a coma to find the world overrun by walkers. Once a small town sheriff’s deputy, now he’s a leader to a group of survivors who he fights for so that others can live. His entire life becomes a life serving others. He wouldn’t have it any other way.

For today’s Wednesday Warriors let’s have a look at The Walking Dead’s strongest character, Rick Grimes, and what makes him who he is. Be warned, spoilers lie therein.

Played by Andrew Lincoln, Rick begins his journey into real life horror by taking the job no one wants. That job is that of leader to a band of people who have no clue what has caused walkers to take over the world. All he knows is what propels him forward each day—the hope for a new beginning, the hope to survive another day—hope. Perhaps a place out there exists that will save his group from the ravages of the roamers. Perhaps that place is closer than anyone thinks. Wherever it is, he’ll be damned if anyone or anything will stop him from finding the peace he so richly deserves.

Every season of AMC’s The Walking Dead, Rick gets that much closer to losing his mind. But isn’t that what being a leader is all about—walking a thin line between making the best decision to becoming an utter failure? In that sense, he succeeds admirably. He’ll have his good days, where everyone will love him for getting them out of the worst of messes, to his bad days, where everyone will question his sanity for him wanting to rid a prison filled with walkers. If that isn’t enough, he has to fend against insubordination at every turn, and that’s not including those outside the group who want to see him dead.

Adding to his troubles, Rick has to deal with the ever-increasing threat of walkers to the group. His life has become nothing more than a game of shells. No matter what he does, he’ll always meet with opposition, and if he so happens to do good, there’s isn’t enough time to relish the moment because the undead is ready to pounce on him and those he loves.

Of all The Walking Dead characters, Rick is the one who goes through the most noticeable transformation. From an everyman to someone bent on survival, he pushes the limit of what it means to be human, all in an effort to keeping the group together and his sanity in check. If anyone needs a reason not to live another day, it’s Rick. Yet, despite all the obstacles, he makes it through each day with a new resolve that never betrays his strong convictions—even if it looks otherwise.

If you’re a fan of The Walking Dead, what do you like about Rick? What excites you the most about the show?