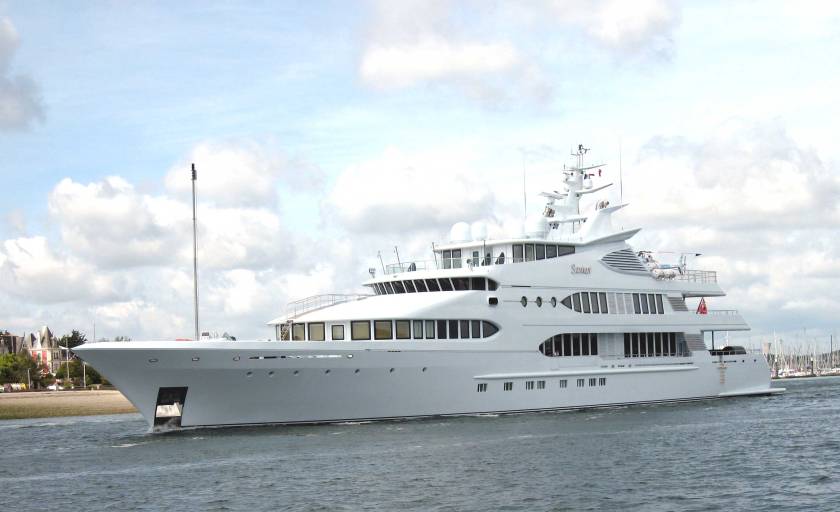 The safest place to be during a zombie apocalypse is at sea. Last summer’s blockbuster hit World War Z proved this by setting the story’s base of operations on a battleship stationed off the coast of the United States. For my Monday Mayhem series, let’s have a look at a few reasons why it would make sense to live on the ocean during the undead’s reign of terror on dry land. Similarly, we can’t ignore the one problem that would exist should someone think about employing such a survival strategy.

Becoming a castaway at sea during the course of a zombie apocalypse would entail many hours of planning and plenty of resources. Much of that planning would involve lists of supplies, access to waterways and the type of boat used for the expedition. Let’s not forget the most important aspect of such a venture—security. How will a survivor defend the ship should a sudden attack take place, by military or otherwise?

First off, what kind of supplies should a potential survivor plan to take with them should a zombie apocalypse take over the world? To answer this question, we’ll have to know what kind of boat will become the home away from home at sea. Will it be a sailboat, motor boat or yacht? As luxurious as the idea of purchasing a yacht is, the cost for a twenty-five to thirty-five footer can go for more than $20,000. That price does not include docking fees and crew. The price for motor yachts jumps dramatically once fuel and mechanical maintenance comes to play. Of course, someone will have the bright idea of stealing a vessel once the apocalypse goes full swing, but we’ll see why that won’t work in the real world.

After determining the boat we’ll take to sea, we’ll need to head over to the mall for some supplies. From the onset, this is not going to be pretty on the pocketbook. Are you ready? Here we go. Depending how many passengers travel with you, you’ll need paddles and oars in case the motor has a bad day and you’re stuck wondering what to do next. On the list go life vests, boat seats, fishing rods and racks, anchoring equipment, boat lighting, first aid, and pumps in case you hit something and need to get rid of the water flooding the hull. In addition, guns and ammunition will come in handy when defending your floating paradise. That’s why it’s a bad idea for some geniuses to think they can steal a boat from their owners, not knowing if said owners are packing heavy.

This is all very well and fine, but why would it be a good idea to dock in the middle of the ocean during a zombie apocalypse anyway? I can think of several reasons. The big one is zombies can’t swim. Try as they may, they can walk the ocean floor and that’s as far as they’ll get to coming close to your boat. Also, in the ocean there are no zombie viruses to fight since that would constitute someone already being infected with the contagion and spreading it onboard. Easiest way to combat the spread of contamination is to throw the infected off the ship. Problem solved. Lastly, other than storms surprising us in the middle of the night, a certain peace comes with living on the ocean. We can have a good night’s sleep without worrying the undead will have a field day on our bones during our slumber.

As promised, the one big problem facing those choosing the ocean as their refuge is food, or rather the lack thereof. After several months at sea without a grocer in sight for miles, the fresh fruits and vegetables will be gone. More than likely, so will the meat, if the vessel does not feature a freezer in the galley. Dry goods will eventually disappear as well. As much as anyone would enjoy living out at sea, food supplies will dwindle, tempers will flare and someone will want to go back to shore for a fresh supply of avocados.

Have you thought of what it would be like surviving at sea during a zombie apocalypse?

17 thoughts on “Zombies at Sea”

Believe and Live
God Is Our Loving Father
Jesus Is All We Need
Believe in God’s Promises
What Did Jesus Drink While Dying on the Cross?
God’s Love Endures Forever
Thanks Be to God