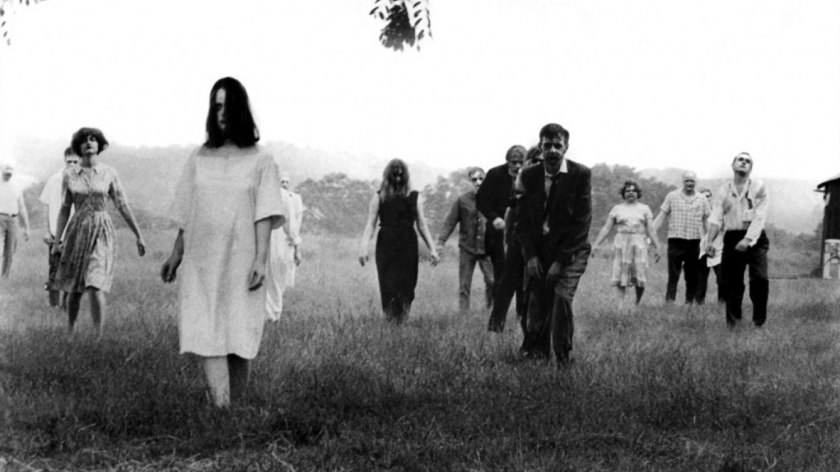 George A. Romero, the father of modern zombie flicks, said in a recent interview with Daily Dead that zombies are advancing at a rapid pace—in his words, “advancing even a little further.” As part of my Monday Mayhem series, let’s have a look just how advanced zombies have become from their docile, sloth-like beginnings.

When Night of the Living Dead made its debut in 1968, the campy feel to the scenes made this film a Horror lover’s delight. What audiences didn’t know was the movie would go on to become an anchor to which other movies in the zombie genre would aspire. For years after its release, zombies had the intellect of vegetables and lurched to wherever they needed to go. They didn’t have reasoning skills. They lacked any sense of intelligence. If they wanted something, they’d hunt for it until they found it. Zombies back then were somewhat silly.

This is where Romero’s 1978 Dawn of the Dead exceeds. All of a sudden, zombies became focused, one-track-minded, machines. They wanted flesh and would do anything to get to it. Their strength to combat those who stood in their way became paramount. Their greatest asset became in attacking in numbers. One zombie will not do it. But maybe many would. And that’s just what happened in this film.

Then in 2005, Romero made a point with Land of the Dead that zombies were here to stay. The undead became intelligent. A character by the name of Big Daddy took over the screen teaching other zombies how to fight the human resistance, taking arms, and pushing forward to destroy those who interfered with the zombie plan to annihilate humans from the face of the earth. (Incidentally, filming took place in a prominent location in Toronto of which I am very well familiar.)

At the same time, in 2002, director Paul W.S. Anderson presented a version of zombie others couldn’t soon dismiss. In Resident Evil, the idea of a fast zombie took hold, the impact of which wouldn’t be realized for a decade or more. When 28 Days Later appeared later that year, the fast zombie had begun to proliferate modern media, and studios looked to screenwriters for original ideas regarding the concept.

But it wasn’t until 2013 when World War Z’s fast zombies became the norm. The film depicted the undead as stampeding Velociraptors that had the ability to hop from walls without consequence. Gone are the days when zombies lurched from area to area in a slow drag that would aid in the salvation of mankind. Instead, these zombies had the ability to launch from their stationary positions to a determined path simply by allowing a smell or a sound to guide them.

What will 2014 hold for the zombie evolution? Will there be a film so different, so astounding that it will rock the zombie apocalypse foundations from its axis?

What do you think will come next for the zombie genre?