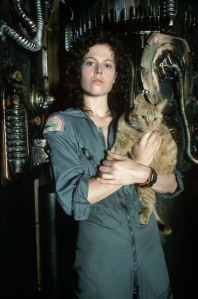 Welcome to Women Who Wow Wednesday. Or as I’d like to call it: WWW Wednesday. This is when I get to ramble about awesome super chicks in movies and in comic books, and boast a little on their personas and their very cool skill sets.

This week? Let’s talk about Sigourney Weaver‘s character Ripley in the movie Alien. I have to say, if any character has that mix of strength and vulnerability we as a movie audience come to expect from a superhero, Ripley is that woman.

Back in the Seventies, there weren’t that many hero women on TV, or the movies for that matter, a woman could take pride in emulating. Well, there was Wonder Woman—ahem—but she was all candy. The most she could do is lasso a villain with her golden rope of truth and pump them, I mean, question them, for information. She also flew around in an invisible plane. Not bad for back then, although we haven’t seen any studios jump at the chance to make a Wonder Woman movie yet. I wonder why? *yawn*

Then there was the show Charlie’s Angels. You really don’t want me to get into them, do you? They were the epitome of hotness back then. Kate Jackson as Sabrina Duncan, Farrah Fawcett as Jill Munroe and Jaclyn Smith as Kelly Garrett played private eyes for the Charles Townsend Agency. Every week they emerged from their office to hunt for murderers, thieves and other lowbrow thugs. It was also an excuse to wear tight-fitting outfits and string-like bikinis for the adolescent males watching the show. But really, did women actually use these chicks as role models? I don’t think so.

By the way, the show is on Crackle.com this month, if you’re interested in watching the entire first season.

Then, out of the darkness, comes Ellen Ripley.

When the spaceship Nostromo performs a flyby of an unknown planet, she awakens from stasis after receiving an unknown transmission. Once her crew lands on the planet, takes samples back to the ship—like we don’t know what’s going to happen—the alien life form kills everyone onboard except for Ripley, who manages to survive and kill the beast herself.

Now, something we have to understand: back then, Ripley became the first female character to show a strong sense of empowerment over obstacles greater than herself. Let’s not talk about Scarlett O’Hara from Gone With the Wind (I have a special post planned to honor her most-incredible story). I’m talking about female characters tailored to fit male protagonist roles. She was the first for a starving Seventies generation. And that character became the mold for future female heroes appearing in movies such as Terminator, Kill Bill and Silence of the Lambs.

What makes Ripley unique? She shows a male toughness in the face of total defeat. Her strength lies in not folding under pressure and taking the shots, even if they hurt. Most of all, for the guys out there…who could ever forget the anticlimax of Alien when she struts around in her panties? This delicate image contrasts the hardness she exhibited earlier in the movie when battling the alien for ship dominance.

Is it a wonder so many sequels flourished from that one single movie?

When James Cameron took the helm of Aliens, the second film to the franchise, his love affair with strong women showed right on the screen. Ripley appeared buff, yet displayed a soft mother instinct. Something of which Cameron depicts in all his female protagonists in every subsequent movie he’s shot. But, I’m getting ahead of myself—I’m saving Aliens for another post. The point being, even Cameron recognizes the impact the Ripley character had within the movie Alien, and uses the strong woman archetype in his movies.

Are there female protagonists in movies you like? Why? Are they the type of women who you’d like to have by your side when battling aliens…or taking out the trash? Let me know, I’d love to hear your opinion.

7 thoughts on “Women Who Wow Wednesday”