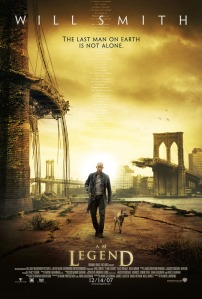 Welcome to Monday Mayhem. This is when I delve into the post-apocalyptic madness called the Zombie Apocalypse (a.k.a “The Future”), and give you my take on what life would be like if we as a human race would allow it to happen. Yes, for some of us it may be fictional, but for others…it’s already a reality. Have you been to Las Vegas lately?

In the movie I Am Legend, Will Smith’s character Robert Neville lives alone in a deserted city to fend for a cure to the dratted virus that annihilated humanity. If you haven’t seen the movie, I’d suggest you stop reading ‘cause I may throw in a spoiler or two.

From this point on.

The thing about the virus that consumed humanity is that scientists engineered it to cure cancer. Yeah, that’s somewhat credible to happen today. No really. In the movie, scientists believed that if they could unleash a biological weapon to destroy cancer cells, they could allow the body to repair itself, eliminating the uncertainty that is happening with today’s methods—and the costs. Unfortunately, it pretty much wipes out all humanity and leaves those who survived, famished zombies.

What I found interesting in the film is when everything falls apart in New York City— why is it New York City always takes the brunt of these end-of-days movie scenarios? (ie. Godzilla, Independence Day, etc.)—the military goes ahead and destroys all the bridges to the island to prevent the infected from escaping. If anyone’s seen The Dark Knight Rises, Bane uses the police to execute a similar strategy to contain the population in Gotham City. Now, this approach as logical as it may seem credible, doesn’t prevent the spread, since the virus crests to become airborne. Once this happens, to put in a cliché, all bets are off.

Thus the creation of the zombies, or rather, the Dark Seekers. Here is a quote from the movie to put the statistics into perspective:

“Seven billion people on Earth when the infection hit. KV had a 90% kill rate, that’s 5.4 billion people dead. Crashed and bled out. Dead. Less than 1% immunity. That left 12 million healthy people, like you, me, and Ethan. The other 588 million turned into your Dark Seekers. And then they got hungry, and they killed and fed on everybody. Everybody!”

Yup, quite a future.

Well, this coming Friday, December 21, 2012, the Mayan calendar ends. Some have gone so far as to say it will be the end of the world. I actually have it written in my Outlook as an event—End of the World. Heck, I don’t want to miss it if it’s going to happen. No way. I’m just wondering how it will happen.

Will it be a virus? Maybe an invasion from another planet. Or perhaps a Great Tribulation as forecasted in the bible.

No one knows. But you can be sure of one thing: If we’re still around next Monday, I’ll bring you another installment of Monday Mayhem. That is, if the internet is still up and running…

What do you think? Do you think humanity is on the road to a Dark Seeker invasion? Or will it be business as usual this coming Friday? I’d love to hear your thoughts.

God Is for Us
What Did Jesus Drink While Dying on the Cross?
Believe in God’s Promises
How Awesome God’s Deeds Are
God Will Rescue Us
He Will Reveal His Glory to Us
The Lord’s Love Endures Forever