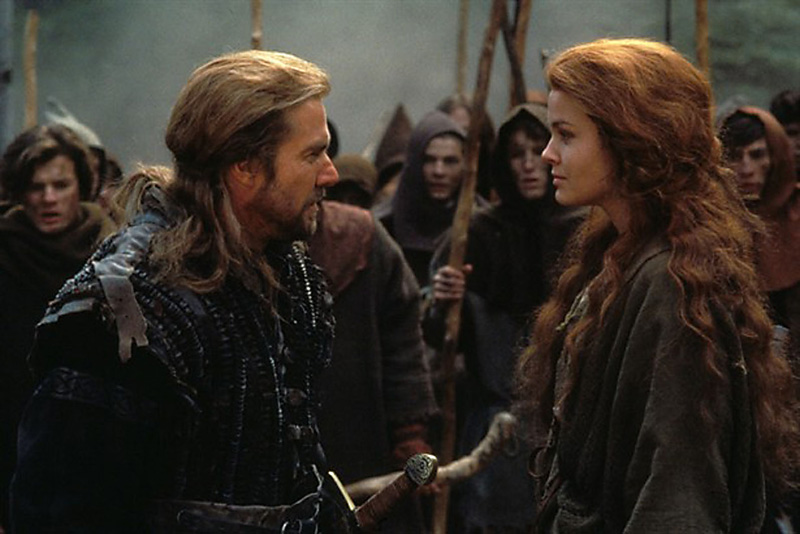 No one is above the code, especially the king. When Kara (Dina Meyer) almost kills the king, it’s the heart of a dragon that saves him. But, what may have saved the king’s life may have also destroyed his soul.

In the 1996 movie Dragonheart, a dragon slayer by the name of Bowen (Dennis Quiad) seeks revenge against the beast that had changed the heart of his beloved king, Einon (David Thewlis). For in the days when medicine ran scarce, the dragon’s heart was the only cure to save a life. For Bowen, the salvation of the king came at the price of villainy, a far greater price than anyone was willing to pay except his mother. Bowen travels the kingdom in search of the dragon that had imparted King Einon’s evil soul.

Kara seeks her own retribution against the tyrannical monarch who had done wickedness against her father. During an evening of festivities when the king made merry with his council, Kara slips into the castle with the intention of assassinating the malevolent royal. Into the dungeon she goes, with the king wanting her to be his companion for life.

Escaping, Kara makes it her mission to destroy Einon with every ounce of determination she could muster. She returns to her village inciting those around her to take up arms and fight the king. The people have a different idea, though. They cannot grasp the concept of victory without her father at the helm. Beaten and submissive to the kingdom, the village folk chase her away.

Not one for discouragement, Kara teams with Bowen the dragon slayer in order to destroy the vile wretch who dares call himself king. Having trained under the tutelage of Bowen, Kara strengthens her resolve to commit her life in the hands of faith so as she can rid the land once and for all of injustice.

Kara’s unshakable nature propels her to accomplish things she had never dreamed of on her own, and with the aid of those who have taken to her message, she yields to her compulsion for dispensing retribution.

Always displaying strength, Kara does not break down in tears when confronted with challenges, and she lives every day as if it were her last. Kara’s belief in integrity and honesty solidifies her moral standing as a true warrior. Malicious spirits may abound, yet, to Kara, she shrugs them off like water trickling from her skin. She doesn’t allow them to disturb her countenance as a force of imitable reckoning.

Kara has shown countless times what it really means to be loyal in the face of adversity. She may have unorthodox methods, but her willingness to die for justice and righteousness has given her a place in Women Who Wow Wednesday.

If you’ve seen Dragonheart, what’s your favorite part? What do you think of Kara? 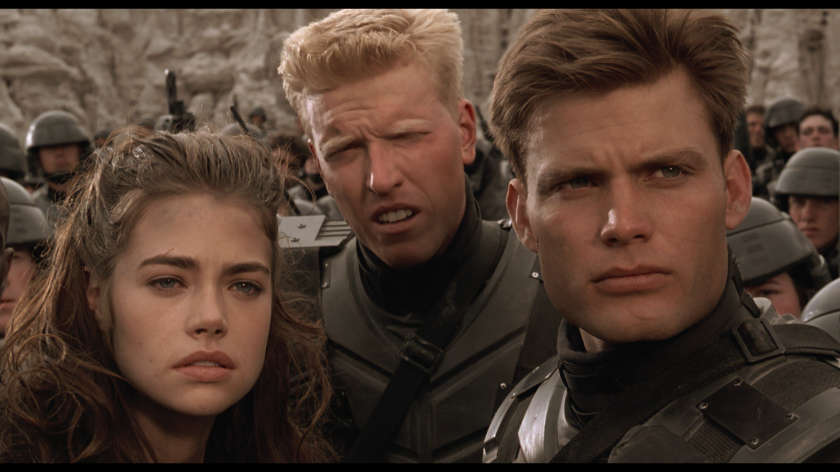 Before Ender’s Game came Starship Troopers. And before Petra Arkanian came Lt. Carmen Ibanez, leader of a ragtag military team set to destroy anything that crawls—literally. Women Who Wow Wednesday celebrates this dynamo of aggression following in the footsteps of the film’s motto: “I’m doing my part.”

Much like Ender’s Game, earth is on high alert, raising a youth army in the mobile infantry to combat bugs from outer space. There is training. There is testing. Then there is deployment to a far planet where the bugs reside. That’s where the similarities end with the films. Starship Troopers’ armies fight the bugs in brutal episodes of dismemberment. The film’s bright and vibrant colors lend to a retro 60’s feel in the midst of dark comedic scenes.

Setting the tone to the film, a history lesson in high school highlights the class rivalry between two attractive students, Carmen Ibanez (Denise Richards) and Dizzy Flores (Dina Meyer). In the middle of instructor Jean Rasczak’s (Michael Ironside) speech of how “violence is the supreme authority for which all other authority is derived,” this interchange develops:

Dizzy: My mother always told me that violence doesn’t solve anything.
Jean Rasczak: Really? I wonder what the city founders of Hiroshima would have to say about that.
Carmen: They wouldn’t say anything. Hiroshima was destroyed.
Jean Rasczak: Correct. Naked force has resolved more conflicts throughout history than any other factor. The contrary opinion, that violence doesn’t solve anything, is wishful thinking at its worst; people who forget that always die.

Aside from being quick with her answers, Carmen also has an astounding ability with math, scoring a 97% in her finals fulfilling Fleet Academy’s first requirement. Her dream lies with piloting a half a million-ton starship. But she would need nerves of steel if she wanted to accomplish such a big dream.

Unfortunately, her weakness may be her downfall. She possesses a soft stomach, unable to watch the dissection of a bug in biology class. The dead bug measures two by two and a half feet. Its long green intestines and slippery organs leave her squeamish until she hurls her morning’s breakfast.

Oh well, at least her friends understand and respect her for her strong convictions and her smarts.

Not wanting to spoil the film, Carmen Ibanez becomes an important figure in the fight against the bugs. Her strong will and temperament saves the lives of many and her natural ability to drift out of tight situations makes her a strong influence to those who look to her as an example.

Have you seen Starship Troopers? What did you think of Lt. Carmen Ibanez?