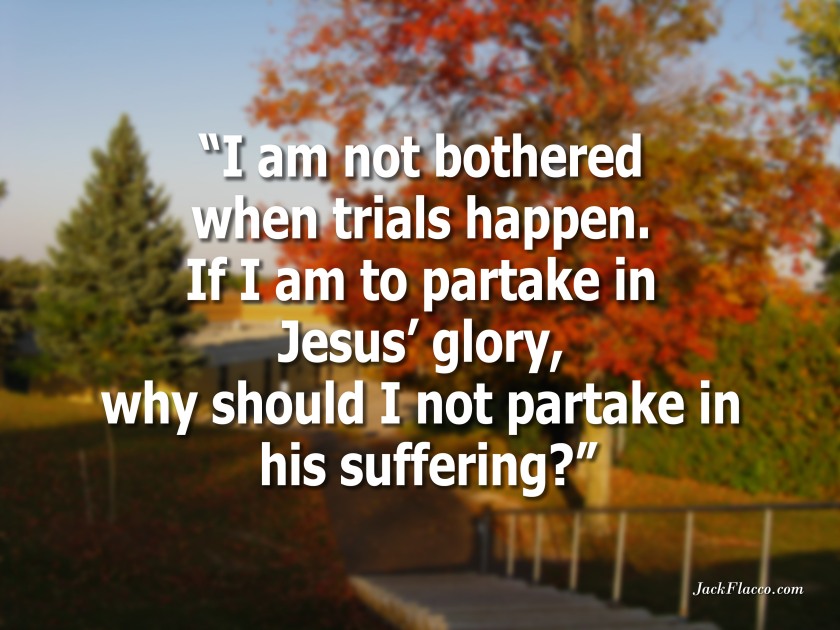 With summer being over and fall slowly showing its colors, I have had a trying month. I realize God does things for a reason, therefore I am not bothered when trials happen. If I am to partake in Jesus’ glory, why should I not partake in his suffering?

So when my son landed in the hospital for a week, and my wife and I took turns to stay by his bedside while the doctors tried to figure out what was wrong with him, I prayed. I knew God was doing something great in our lives, but I did not know what it was.

Now that I have had the chance to think back on everything, I know for sure God was there every step of the way, guiding doctors and nurses to provide the utmost care my son needed in the short time he was there.

I remember reading when Joshua succeeded Moses, and Israel was about to enter the land of Canaan. Moses said to the assembly, “Be strong and courageous. Do not fear or be in dread of them, for it is the Lord your God who goes with you. He will not leave you or forsake you” (Deut. 31:6 ESV).

For Moses to have said that, Israel had to have been in a dark place. From their perspective, Moses was old in age and about to die, they had Joshua as their successor, but still, could they prosper as God had said under his new leadership? Then there was the incident where forty years earlier God had promised the land of Canaan to the previous generation, but because of their disobedience, he had caused that entire generation to die. Who was to say God would not do the same to them?

Yet instead of allowing the darkness to penetrate their fortitude, Israel turned around and took those words Moses spoke to heart. They gathered their courage, followed Joshua and entered the land of Canaan, fully trusting God that he would vanquish their enemies.

I did not know how God would resolve my situation with my son, but I did know that whatever happened, it would be his will and it would all work for the greater good.

I am grateful for God’s intervention last week. I do not think I could have made it through without those words of encouragement spoken by Moses thousands of years ago.

If you, too, feel discouraged at times, fear not. For God will never leave you or forsake you.

10 thoughts on “Be Strong and Courageous”