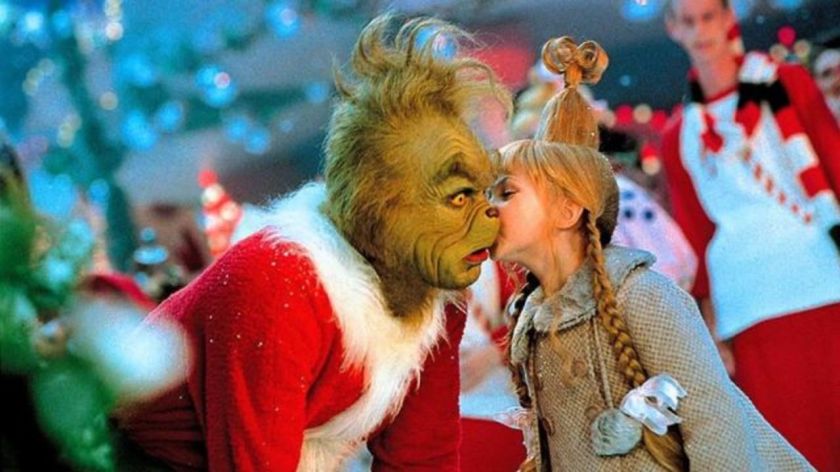 How the Grinch Stole Christmas is not a film one would typically view during a summer vacation. If the title isn’t a hint enough, the story is a Christmas movie with all the frills intact. You have decorations. You have presents. You have a tale about a place called Whoville and its villain, a greedy creature that lives in the mountains preparing an assault on an unsuspecting populace.

I’m one of those people who doesn’t pay attention to reviews before watching a movie. If anything, I ignore what people say about a film until I see it and make up my own mind about whether I like it or not. How the Grinch Stole Christmas is one of those movies you either love or hate. After reading the reviews on IMDB.com, I’m glad to have watched it first in order to form my own opinion. I love the film. Some may disagree with me, but that is an opinion.

We can agree to disagree.

The Grinch (Jim Carrey) isn’t the kind of creature you’d find in any ordinary story. Then again, this story isn’t ordinary. The plot focuses on the Grinch finding fulfillment in hate. The Grinch hates Christmas. But there is more to it than simple hate. He despises Christmas. He loathes it.

With that knowledge, how on earth would I even consider the character the Grinch a Wednesday Warrior?

He lives in the town’s dump. He eats rotten onions as a snack. He has all sorts of bugs running around his teeth—if you’ve seen the movie then you know what I mean. He sabotages children’s toys.

Oh, the Grinch is a real winner, for sure.

Yet, despite the relative evil twinkling in his eyes, the Grinch has more going on in that noggin of his than few may suspect. Somehow, little Cindy Lou Who (Taylor Momsen), the daughter of the town’s postmaster, has grown quite fond of the menace and believes he has a heart—even if it is two sizes too small. She sees something in the Grinch others can’t comprehend. It may have to do with him having rescued her from the jaws of the mail-processing machine. Or, it could be that she finds him to be someone willing to make a change for the better.

Now, if you’ve seen the film, I won’t spoil it for anyone else. We know what happens. If you haven’t seen it, the Grinch is a character worth studying. His traits at first may appear unsettling, but there’s a reason for that. Not everything is what it seems, and this is the reason why critics either love or hate this film.

The Grinch is a reflection of those lost before found, taken before brought back, hated before loved. Whatever anyone thinks of the Grinch, it is nothing in comparison to his redemption, which ultimately deals with the changing of that heart two sizes too small to a real heart.

But really, isn’t that the essence of good character—to change after realizing what once was, was wrong?

Have you seen How the Grinch Stole Christmas? What do you think about the Grinch?

11 thoughts on “The Grinch”