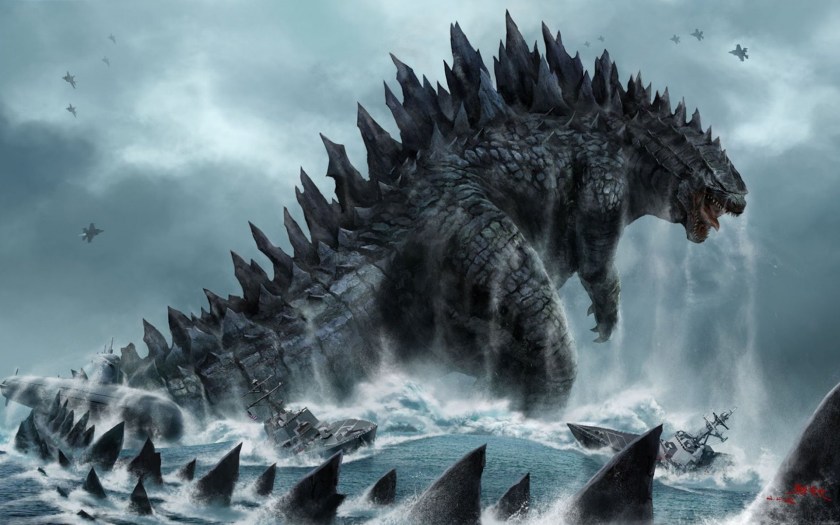 I think this is the first time I’ve ever chosen a monster to be part of my Wednesday Warriors series. Of course, there is always a first time for everything. After all, in the past I’ve featured cartoons, therefore monsters weren’t too far behind.

Yet, some may not consider Godzilla a monster at all. He, and I use the term “he” loosely here, is more like a superhero lumbering ashore when a city falls prey to the destruction of a malevolent creature. A rescuer. Check. He’s more than a monster; he’s a force of vengeance against foes threatening humanity’s very existence.

How did Godzilla become a cultural icon for good versus evil? Had he always been this cuddly?

There was a time Godzilla was an evil monster the army wanted to kill. As a spawn of nuclear testing, he trampled all over Japan in his first sighting in 1954. After that, he became a film sensation. Kids loved him and the Japanese audience couldn’t get enough of the semi-dino biped.

Years later, in the 1960’s, other monsters came to challenge the towering beast. Names like Rodan, Ghidorah and Mothra became mainstays for viewers. The secret was out, a Godzilla movie wasn’t all about saving the planet, but it was about the fights between the creatures that gave the films its appeal. What could have been a hokey series, turned into a glorified franchise with all the accolades that went with it.

Somewhere along the line however, things changed. In an effort to cash in on the popularity of the Godzilla phenomenon, the studios, with their ever-watchful eye on the bottom dollar, pushed to the theaters sequel after sequel of absolute nonsense. Godzilla soon transformed from the hero every kid wanted to play with to a watered-down image with little substance to carry the franchise forward.

It wasn’t until the failure of 1998’s Godzilla at the box office that the studios decided to hold off on producing any more monster movies for a while. Oh, sure, there was Godzilla 2000, but we won’t talk about that.

Then 2014 happens. Godzilla is back and he is pissed. Gone are the funky Bruce Lee Jeet Kune Do moves earlier versions of the brute possessed. This time, he is here to settle old scores and purge the world of not only the monsters that threaten the U.S. west coast, but also to shatter his previous image as a weak follow-up to an impoverished genre.

This time, Godzilla brings it, yet not without controversy. Folks complained for the little screen time the hero actually had. To those detractors I say, all good things are worth the wait. In a time when everyone wants to see superheroes from the first frame of film, Godzilla was a welcome change away from today’s convention. Reminiscent of the old movies where the big reveal takes place in the final act of the film, Godzilla rocks in a classic monster movie with all the fixings.

And the best part about the whole thing? He is bigger and better than ever.

Have you seen any Godzilla movies? What do you think of him?