Four years later, it’s done. The final book to my Ranger Martin zombie series is complete. Today I reveal the cover to Ranger Martin and the Search for Paradise. Am I excited? I wouldn’t know where to start to tell you how I feel right now. Yeah, I am excited. Can’t you tell? Next month, my dream will come true. On October 20, 2015, the book releases. 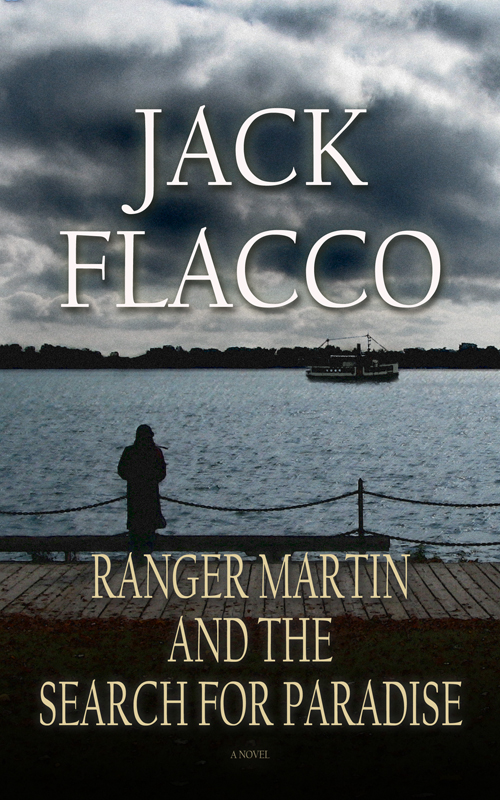 Last Friday, I’d promised I’d tell you where the idea for Ranger Martin came from.

As clichéd as it sounds, I woke up one morning in October 2011 with Ranger’s name surfing through my head. While shaving, the image of a zombie slayer turned father-figure began to take shape. Ranger would travel across the country saving kids from the likes of chewers and eaters, providing lodging and giving them a purpose for their existence.

The story grew after I had entered it as part of National Novel Writing Month in November that year.

Two of the other main characters in the series are Matty, a fifteen-year-old who doesn’t take any flak from anyone, and her know-it-all eight-year-old brother, Jon. Together, they’re the ones who cause Ranger the most grief.

What I found interesting writing this series is how the stories for each book flowed without much effort on my part. I had a general idea of how it would all work—actually, all I had were the titles Ranger Martin and the Zombie Apocalypse, Ranger Martin and the Alien Invasion, Ranger Martin and the Search for Paradise, and the endings. Beyond that, I hadn’t a clue as to what would happen in each novel. Every day that I took to my writing hole there was an adventure awaiting for me to discover.

In all honesty, it was as if I were taking dictation.

Anyway, to give you an idea where the cover came from, the photo is from October 2004. I was sitting on a hill watching the boats pass at Toronto’s Waterfront when I saw a women standing on the dock. She caught my attention and I snapped her picture. A few seconds was all it took and she was gone. Years later, I would remember that photo and it made me wonder whatever happened to that woman. What was she thinking while she stared into the distance? Was she thinking of her family? Was she thinking of a long lost love? Or was she simply standing there because she saw me taking photos of the area knowing she would become a timeless image for others to talk about?

If she only knew her image would become part of the cover to my next book, I’m sure now she would think it flattering.

Not to make it sound as if the whole process for writing the trilogy was easy, I had to sacrifice a better part of my Sundays and evenings to put the series together. That included dedicating writing sessions between events such as home renovations, birthdays, driving my kids to recitals, long weekends, funerals, and anything else you can classify as mundane tasks that would make up life. Add to the laundry list the blog schedule I had committed to in December 2012 to write three posts a week, no matter what the circumstances, and you have a very busy Jack.

Mind you, I’m not complaining—I’m explaining. Then again, I wouldn’t trade in the experience for anything in the world. If it hadn’t been for Ranger Martin, I wouldn’t have found the writing rhythm that works for me. Ranger taught me

Okay, I think I can now can tell you what Ranger Martin and the Search for Paradise is about! From the back jacket:

There is no cure. The change is permanent. Whoever says they can fix this is wrong.

Months ago, billions of people died in the zombie apocalypse. The survivors either have become refugees looking for a way out or have turned against each other. No one will admit they killed their friend for a package of raisins. It happens though, and there isn’t anything anyone can do about it.

That is, until now.

When the military lays siege on his silo, Ranger and his crack team of professionals—a bunch of kids, really—have no other choice than to run. But after he discovers a map that may lead to a mythic city called Paradise, where neither army nor zombie can invade, Ranger mounts a cross-state journey to find the place of safety before the others find him and it’s too late.

Now, because I would love for everyone on the planet to enjoy Ranger Martin’s way of solving the zombie problem, and in celebration of my October 20 release of my new book, starting tomorrow for 5 days, I will be offering the first book in the trilogy Ranger Martin and the Zombie Apocalypse FREE. That’s right. You’ll be able to download it without spending a dime. It’s my way of showing my appreciation for all the support extended to me these past few years while I teetered on the edge of insanity doing what I love doing—writing about the zombie apocalypse.

Thanks everyone for all your support!

What Did Jesus Drink While Dying on the Cross?
He Is Christ, Son of the Living God
God Is Our Loving Father
Believe in God’s Promises
All for God’s Glory
God Will Rescue Us
His Name Is Above All Other Names