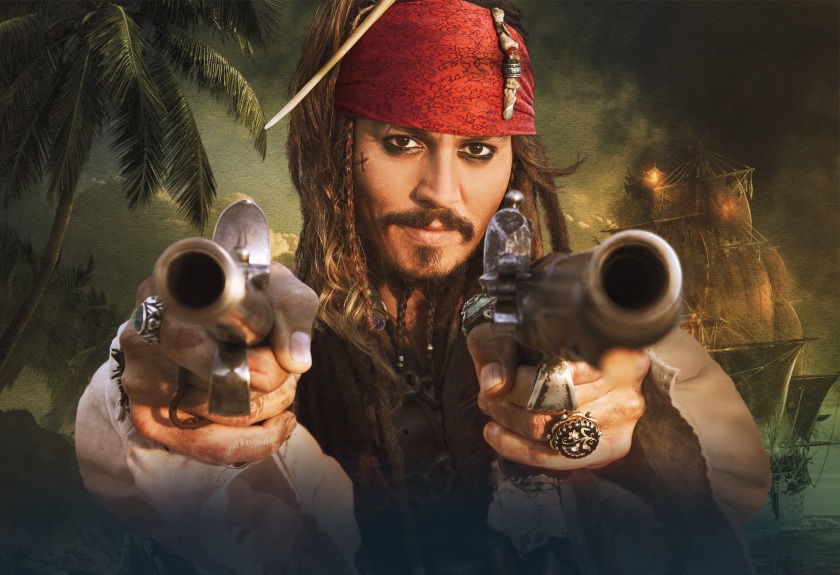 In an era when pirates sailed the high seas, looted and pillaged innocent ships of their booty, a man of no certain countenance appears from the fog. An expert swordsman, an even greater marksman, he leads an adventure-packed tale featuring a crew of swashbucklers not seen since the days of Errol Flynn.

Today, Wednesday Warriors salutes Captain Jack Sparrow, the eccentric and often-humorous main character from the series Pirates of the Caribbean.

The box office hit of the 2000’s, the Pirates of the Caribbean franchise brought together some of the very best actors in Hollywood to treat the audience to an all-you-can-eat rendition of the Disney ride that goes by the same name.

In the lead role, Johnny Depp as Captain Jack Sparrow, portrays a disheveled pirate who not only lives by his wits but also has luck land on his lap on more than one occasion. For the audience, the draw to such a quintessential character is his free spirit and lack of living a responsible life. The freedom of the ocean lends Jack his independence–independence from duty to country, independence from those who seek to place him in shackles.

Fashioned after The Rolling Stones‘ Keith Richards, Jack wafts from step to step in an almost-constant inebriated state. He’s had his fair share of battles, but the battle he should be most proud of is the fight he wins gaining the respect of his audience. With every stroke of his sword, the cheers directed to his onscreen persona increases. No other character of the series illicits the audience’s loyalty as much as Jack Sparrow.

He truly is a larger-than-life character worth cheering for.

Aside from Jack’s mastery with a weapon, he also displays a kind heart to those he calls his friends. No one would think it though, given his predisposition to how he interprets a promise. What his friends might understand a promise, he might understand as an agreement with plenty of loopholes to benefit his free spirit. One thing’s for sure, there’s no tying down Jack. When he gets something in his head, he jumps in with both feet without thinking if it might be right or not to do.

And should his friends end up at the end of a sword, prepare to see Jack swing into the scene with weapon drawn and boots ready to kick butt. He’s not one to allow his friends to fall into the hands of no-good and vagabonds. He will protect them at the cost of his life.

Captain Jack Sparrow is Wednesday Warrior’s swashbuckling hero who leads his fans from one adventure to another. Arr!

What do you like about Captain Jack Sparrow? Is he a good movie character worth emulating in real life–in attitude, that is?