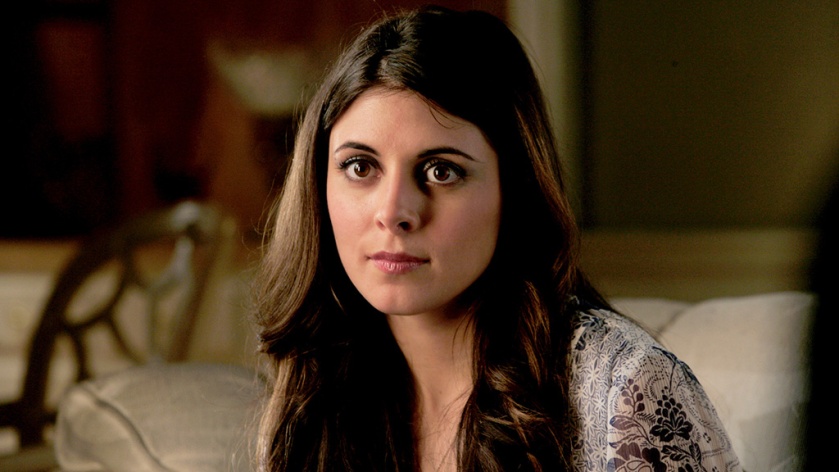 If you’ve ever seen The Sopranos then you’ll know Meadow Soprano (Jamie-Lynn Sigler) is Tony Soprano’s daughter. Some may think she’s an unlikely candidate for a Women Who Wow Wednesday tribute. I beg to differ. As you’ll see, Meadow is a lot smarter than the average young woman and a heck of a verbal fighter. There’s nothing in her vocabulary that would compel anyone to call her a doormat.

[Author’s note: For those who have been following my Women Who Wow Wednesday series since its inception in December of 2012, I write these posts in honor of female fictional characters who show more than an interest in being good role models for women everywhere. Yes, I write about darker characters, too (i.e. The Wicked Witch of the West, Kathryn Merteuil from the movie Cruel Intentions, etc.), but only in the context of them possessing the ability to lead. Other than that, I do not enjoy watching female characters in film act as doormats when I know they could do better. The same goes for real life.]

In Meadow’s case, she’s a mob boss’ daughter, an honor student and will eventually end up working in law under the auspices of social reform and aid for the less fortunate. If anyone deserves a U.N. honorary role for human rights, it’s Meadow Soprano. She never agrees with government policy that works against poverty. Not only is she a social issues maverick but also a leader.

How did she get this way? Having Tony Soprano (James Gandolfini) as a father helps, since just when he thinks he has the upper hand, she knows how to play him perfectly. For instance, one evening she uses her grandmother’s house for a late-night party, but gets off with minimal punishment from her parents. This is after her friends had trashed the place, leaving behind broken windows, soiled walls, and vomit on the floor. The next morning, she apologizes and, as a preemptive strike, suggests her parents take away her Discovery card for three weeks. They cede thinking it’s a great idea. She walks away with a smile on her face.

The other instance where she shows her metal is when she is dating Jackie Aprile Jr., the son of the late mob boss of the Soprano family. She suspects him cheating on her, but it isn’t until she chases after him that she discovers the truth. In the throes of a massive head cold, she catches him with another woman and dumps him right on the spot that evening. She never returns, which shows her resolve as someone who thinks better of herself than stay with someone who lies and is an abusive mate.

Meadow Soprano is more than a young woman on the road to discovery. She grows to become an advocate for the poor, a loving daughter, and a close friend to those who need a friend. She’s a wonderful role model for women looking for an alternative lifestyle without all the drama associated with personal relationships.

In other words, Meadow is someone who would make a good friend for life.

Have you seen The Sopranos? What are your feelings toward the character Meadow Soprano?