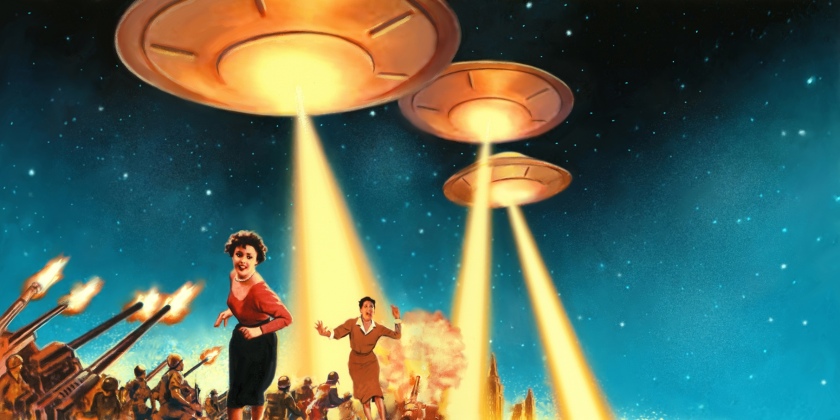 Aliens have always had a large following among sci-fi fans from every generation to the present. With the “little green men” image conjured from eyewitness testimony of flying saucer sightings in the 1950s, the fear that one day aliens would take over the world came to being. There’s more to this story, though, and as with every Monday Mayhem post, it deserves some study. Let’s have a look at the inexplicable tale to understand from where the alien world domination plot originated.

On October 30, 1938, dramatist Orson Welles, via The Mercury Theater on the Air anthology series, presented his adaption of H.G. Wells’ The War of the Worlds to an unsuspecting radio audience. Other than a brief introduction, the program aired in a news format, lending credence that an actual invasion from Mars was taking place. Many listeners dropped into the middle of the sixty-two minute broadcast to catch simulated news bulletins and interruptions of sorts, terrifying them into running for their lives. The show created panic and hysteria on the eve of Halloween to cause many, days following the incident, to complain to the Federal Communications Commission.

Since then, America has been on high alert.

What some may not know is Welles was not the brainchild to such a realistic method to drama that had unfolded that night. In 1927, a similar incident took place when Adelaide station 5CL in Australia presented another invasion of its people utilizing the same techniques as Welles had used that fateful Halloween eve.

What was the reaction in 1938? Paul White, CBS News chief wrote bedlam reigned. Town switchboards lit with people trying to verify the reports of Martians invading earth. In Cleveland, CBS’ WGAR received calls from listeners in a panic. Despite pre-Tonight Show host Jack Paar’s attempt to calm the masses, people were accusing the famous announcer of a government cover up, a conspiracy of grand proportions. In Concrete, Washington, a coincidental blackout of phone and electrical lines pressed the listening public to flee for lack of communication with friends and family. Local reports spread the word of mayhem in the streets and placed Concrete on the map for all to see.

Within a month, the media published 12,500 articles about the incident. No one forgot that night the Martians invaded Earth. And so, the alien invasion tales came to be.

As a consequence to the broadcast, the American public couldn’t get enough of alien invasions. Subsequent decades produced a litany of movies centered on the genre due largely to the threat of war and communism:

But if anything is true, the influence of an alien invasion couldn’t be more prevalent than in pop culture. Can anyone argue that at least one child does not walk around in an alien costume during Halloween?

Are you familiar with the original War of the Worlds broadcast? Have you listened to it, since it is available free online?

Do Not Be Anxious
Love for God’s Word
Thanks Be to God
God Will Rescue Us
Trust in the Lord
What Did Jesus Drink While Dying on the Cross?
God Is Our Loving Father