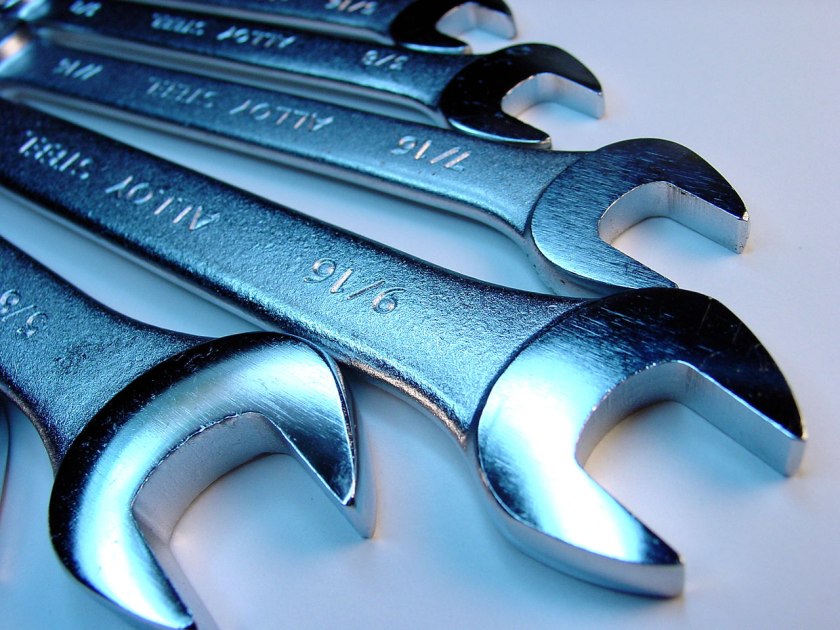 I’ve never been much of a tools guy. While other men may enjoy collecting tools, the only thing my tools collect is dust. Yep, not much of a handyman, if you know what I mean. If I had it my way, I’d sit on my rump and enjoy the summer sun while I hire someone to look after everything that needs fixing around the house. Actually, that’s not too far from the truth.

For this Freedom Friday post, I’ll be talking about my tools—what I do with them, and what I think I ought to do with them.

It all started a few months before my wife and I got married. One day she noticed I didn’t have that many tools and decided to do something about it. Well, I didn’t have that many tools because I didn’t like working with my hands. Anyway, let’s keep on topic. One Saturday evening, I popped over to her basement apartment for a movie night. At the time, Star Trek: The Next Generation was one of our favorite shows and we agreed that she’d tape the week’s episode and we’d watch it on the weekend when we got together. There was a period when we could only see each other on weekends since she lived on one side of the city and I lived on the other.

Although Toronto wasn’t as big as it is today, travelling back and forth in a beat up Honda made the one-hour trip interesting. I once broke down on the highway and had to call for a tow from a gas station ten minutes away. Let me say this, ten minutes is nothing to walk. But when it’s cold, with no cellphones available at the time, and you’re heading up a rural pass in the middle of the night—I’ll admit—it got kinda creepy.

Anyway, back to the story. When we finally settled into a cuddle, she remembered she had something to give me. We did that all the time and we still do. Sometimes we don’t give each other gifts during those mandatory days of giving—Father’s Day, Mother’s Day, birthdays, etc.—but we’ll surprise each other with gifts throughout the year for no apparent reason other than to show our affection for one another. Besides, gifts mean more that way when we don’t have to give the gift out of obligation. All right, ‘nough said about that. Where was I? Right, her gift. She gave me a gift and it was heavy. I didn’t have a clue as to what it could have been. All I knew was she’d always given me things that I needed or wanted. Much like today.

I unwrapped the present, and there in front of me was a screwdriver tool set with a variety of bits and ratchet heads. Believe me, when I first saw it, I wasn’t sure why she would have given it to me, considering I wasn’t a tool guy. Let me tell you. That gift was a stroke of genius. I still have it in its original case.

Since she gave it to me, I’ve hung pictures, taken apart phones, computers, built shelving, put up curtains, built desks, cupboards, tables, chairs, wired cable and more. Do I sound like one of those $19.99 TV commercials?

Adding to my collection, she’s given me a hammer, pliers, drill bits, a drill, of course, measuring tapes, more screwdrivers, a few bottles of crazy glue and garden equipment.

Like I said, if it were up to me I’d sit on my rump and hire people to do the jobs around the house. But I’ve grown. I’ve changed. I’ve gone on to build two basements with my tools—very different from doing nothing around the house.

And it all started with a toolset my wife gave me.

What’s your favorite tool? Are you a collector or handy-person?