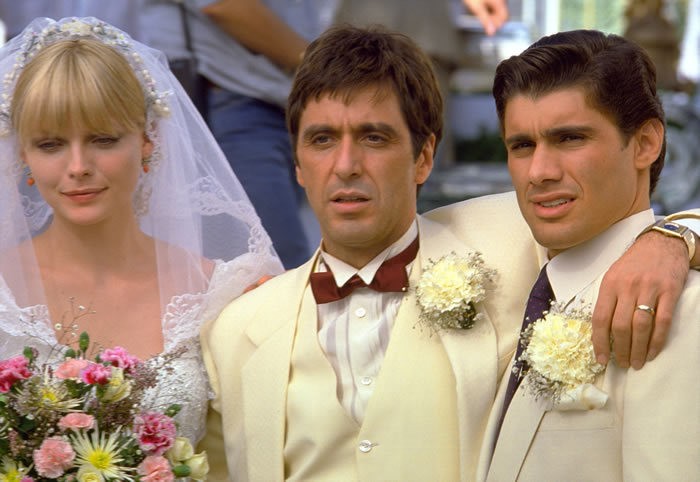 From the moment she appears on the screen, she captures Tony Montana’s heart and doesn’t let go. A blonde bombshell from Baltimore, Elvira Hancock is the token prize to whoever can claim her as his. That is, whoever can afford her.

For those who have been following Women Who Wow Wednesday, Elvira (Michelle Pfeiffer) seems an unlikely candidate to include in the series. After all, she’s spoiled, a narcissist, a drug addict—everything about her would make a family man cringe not wanting to have anything to do with her.

But there are moments—moments when in the throes of confusion—when she can utter just one line and it would relate years of wisdom within a single thought.

First, let’s get to the backstory. Tony Montana (Al Pacino), a political refuge from Cuba, lands on United States soil seeking asylum. Nothing could be further from the truth. Fidel Castro, the little island’s leader, had opened the floodgates releasing the dregs of his jails to an unsuspecting American people. Tony, a possible former assassin, is one of them.

In a refugee camp, Tony earns his Green Card by murdering a former Castro associate in a brutal act of vengeance. Released to the streets of Miami, he rises from dishwasher to a full-fledged drug dealer importing cocaine from Columbia. His world changes once he meets Elvira.

It doesn’t stop Tony from chasing after the knockout waif. Despite her illegal cravings, her self-absorbed attitude and her constant need for attention, Elvira is a fighter and that is what Tony recognizes. The men she associates with can have her snuffed out without so much as a second thought. Yet she gets away with talking back without much resistance.

When Elvira wants something, she goes for it. She doesn’t beat around the bush:

When Tony steps out of line, disrespecting her, she has this to say:

At the height of her drug abuse, she manages to utter one of the most prolific lines in the entire movie:

Elvira: Nothing exceeds like excess. You should know that, Tony.

It gets better. When things begin to sour between her and Tony, her quick wit provides some much-needed levity in their marriage:

Tony: I work hard for this. I want you to know that.
Elvira: It’s too bad. Somebody should’ve given it to you. You would’ve been a nicer person.

Finally, while everything falls apart, Elvira sticks to her guns:

Tony: Look at that: a junkie… I got a junkie for a wife… Her womb is so polluted… I can’t even have a little baby with her!
[Elvira throws wine in Tony’s face]
Elvira: How dare you talk to me like that! What makes you so much better than me? What do you do? Kill people? Deal your drugs? Real contribution to human history, Tony. What makes you think you can be a father? You don’t even know how to be a good husband.

Now, Tony could easily put a bullet in her head, but he doesn’t. Regardless of her shortcomings, she not only makes sense, she also proves that standing up to a force much more powerful than herself proves her ability to dictate her self-worth. And that’s something to wow about.

Have you seen Scarface? What did you think of Elvira?