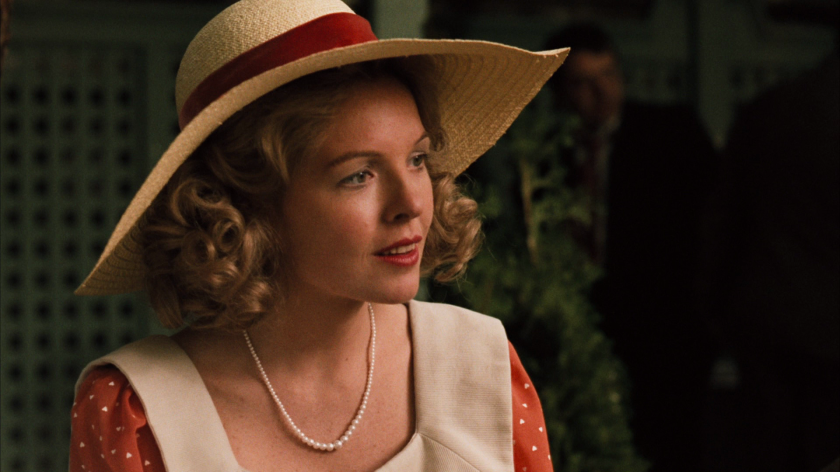 When she married into the Corleone family, she didn’t know what she was getting into. After all, her husband, Michael (Al Pacino), was a war hero. A gentleman. His family at the time seemed warm, friendly, and above all, close. Yet, the warning signs were there, the red flags a woman ought never to ignore. Women Who Wow Wednesday explores Kay Adams-Corleone of The Godfather I & II.

Being Italian, I grew up with the Francis Ford Coppola film Mario Puzo‘s The Godfather on TV. While my friends watched hockey, I delved in the world of the Corleones. Not surprising, the family dynamic of the main protagonists reminded me of my own family. We ate pasta on Sundays, had massive weddings to attend, and always had an envelop ready for a special occasion. Our music was fun, our food was filling, and our stories we told were always of the old country. How great the old country was and how we’d like to go back and live there someday.

Kay (Diane Keaton) first appears as Michael Corleone’s date at his sister (Talia Shire) Connie’s wedding. There, she meets Michael’s brother Fredo (John Cazale), who seems wet behind the ears from all the booze flowing from the open bar. Sitting across the table from Michael, she wonders what a big man like Luca Brasi’s doing talking to himself. Michael calmly tells her how Luca helped his father (Marlon Brando) handle a family matter. A bandleader wouldn’t cut Johnny Fontane (Al Martino), Connie’s wedding singer and friend of the family, from his contract. Michael then adds, “Luca Brasi held a gun to his head, and my father assured him that either his brains or his signature would be on the contract.”

That was Kay’s introduction to Michael’s family. Michael attempts to comfort Kay’s concern with telling her, “That’s my family, Kay, that’s not me.”

They fell in love while they were students at Dartmouth College, New Hampshire, just after the war in 1945.

When a murder attempt on Michael’s father goes bad, Kay doesn’t reappear until a year after Michael returns from his exile in Italy. She meets him for the first time not knowing he’s changed. His heart has grown cold from witnessing the death of his first wife, Apollonia, who he’d met in Italy and had later died in a car bomb explosion meant for him. Kay agrees to marry her longtime love, Michael, after he promises her his family’s business will become legitimate within five years.

During the baptism of his sister’s first child, Connie’s husband disappears. Murdered. Kay approaches Michael about it. He refuses to answer her question of whether he had anything to do with it. She doesn’t back down. He explodes, “Enough!” Moments later, he cedes to her curiosity. Just this once. She asks again if he knows anything about Connie’s husband. No, is his flat reply.

Liar. And she knows it.

As the door closes on a chapter in the life of the new godfather, Kay realizes Michael has her trapped.

An associate’s plot to murder Michael brings out the worst in everyone. Kay has already been stewing about his part in the death of Connie’s husband, and to make matters worse, she’s pregnant with his third child. Her attitude toward him has been less than enthusiastic. His long absences and lies have also taken a toll on Kay. She appears older and stoic. However, she continues with loving her children in spite of Michael’s business dealings.

Throughout Michael’s ascent to power, Kay has watched him selfishly turn inward to a nub of the man he never wanted to become. She understands she made a mistake marrying him and wants out. But, how to tell him? He’s the head of one of the most ruthless crime families in all of the U.S., there’s no way he’d take the news of her wanting to leave without a fight. At the same time, she miscarries.

Yet, she gathers her belongings, packs the kids and approaches her soon-to-be former husband. In a heated argument guaranteed to get her killed, she stands up to the crime boss telling him of her intentions to leave, wanting to take the children with her.

He will not have it. She will not take the kids. Ever.

In a bold move to assert her own control, Kay reveals the child she said she’d miscarried she instead had aborted. She couldn’t see herself rearing another Corleone in Michael’s world. Yes, it was a boy.

Without warning, Michael unleashes a slap that Kay absorbs in horror.

Soon after, she no longer is part of the family; even loosing her children to their father’s misshaped view of life. But as with anything that ever happens, something positive always comes from it. She no longer has to deal with the days of loneliness behind the confines of the four walls of her home. She’s also free from pretending anymore to love her husband who has been nothing but an overbearing, domineering man obsessed with control over every aspect of her life. And she can now live a life of freedom. Free from her husband’s lies. Free from her husband’s anger.

Was it worth it for Kay to have gone against the family in such a way? Do you think she initially lived a life naïve of her husband’s deceptive ways?