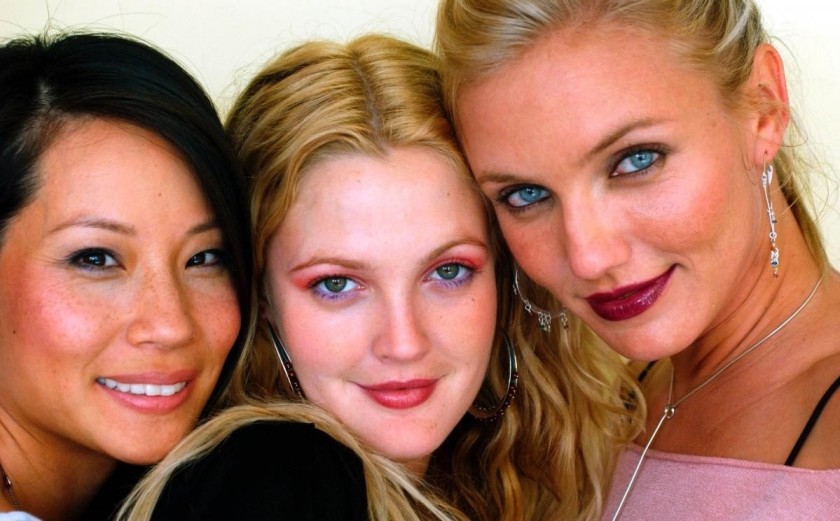 Okay, I’ll have to admit, some people didn’t like Charlie’s Angels (2000). It felt like a bunch of music videos put together to make up a movie. Ah, but how sweet a movie it is for those of us who want flash, action, and popcorn excitement.

For the first time since I started writing my Women Who Wow Wednesday series, I’m not going to look at one kick-ass chick. Not two. But three! That’s right. I couldn’t decide on who to choose, so I decided to do ‘em all. Hold on to your butts. It’s gonna be a wild ride.

Natalie Cook—Played by Cameron Diaz, she’s the platinum blonde of the bunch. Highly skilled in martial arts, able to give a punch and take one without effort. She’s an expert driver and pilot. If it has wheels, she can drive it. If it has wings, well, you know the rest. There’s not a vain bone in her body. As a nerd in high school, she once dressed like Princess Leia (braces, glasses, and the bun). Although some folks might consider her naïve, in reality she graduated MIT with a Ph.D., and worked as a research scientist for the Royal Swedish Academy of Sciences.

Natalie’s known for her fantastic optimism. Life is better when justice prevails and evil gets it up-and-comings. She has supermodel presence, but she’s unaware of it. She’s the type of girl who will answer the door to the UPS guy in her underwear. Yeah, in her Spider-Man underwear.

Alex Munday—Played by Lucy Liu, she’s exotic, an expert in linguistics, and possesses business acumen beyond genius. Much like Natalie, she’s proficient in kung-fu. Her major love is fencing and horseback riding. She may seem small, but her background is massive. Once a teenage gymnast going for the gold in the Olympics, she also proves herself a large asset for NASA as an on-call government engineer. And let’s not forget her stint dancing with the Stuttgart Ballet. The benefits of a classical education.

Alex is the most versatile of the angels. She can play many roles, and slip in and out of characters without hesitating. She also has a love for cooking, regardless if the kitchen hates her.

Dylan Sanders—Played by Drew Barrymore, she’s the hostile one with the curled hair and short fuse. She managed to squeeze some time away from the police academy after beating the crap out of her training officer. Generally rebellious, always an anti-everything. She never looks before she jumps. Her education? Lackluster.

But Dylan has something going for her: she finds the good in everyone. She’s also the most affectionate of the three. Even though she can clear out a room of bad guys with her hands tied behind her back, her real talent lies in her power to be different. A tongue-bearing rocker at heart. She is a force of reckoning.

These are the angels. Unique in every way. Divided, they pose a threat. Together, they can annihilate.

Ever see Charlie’s Angels? What did you think of the awesome trio?