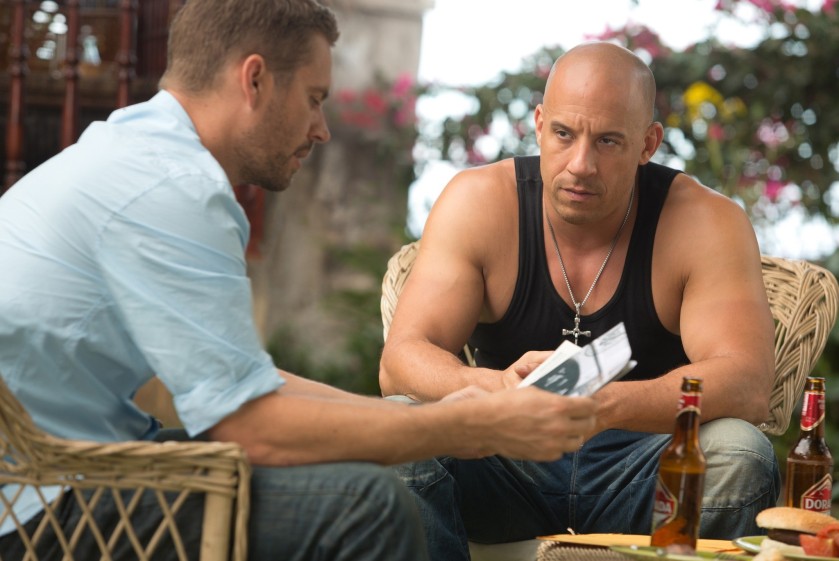 A Western has that moment in the story when the hero makes peace with his broken life and decides it is better to die in a blaze of gunfire than to live out the rest of his days as an ordinary gentleman.

Dominic Toretto (Vin Diesel) of The Fast and the Furious franchise is that hero. He is also the focus for today’s Wednesday Warriors.

From an early age, Dominic took to cars, tearing them apart, putting them together. He had within him the ability to make things go faster. Eventually, his hobby turned into a money machine where he spent most of his time souping up old pieces of junk into gleaming bullets that would scream down a track and win challenges without effort. His girlfriend Letty (Michelle Rodriquez), who grew up with him, had a similar passion and made the perfect match for the speed demon. They had an understanding—she would be by his side and he wouldn’t tell her what to do. Then again, Dominic was the type who didn’t like anyone telling him what to do either.

But something exists within Dominic few know about—a darker side.

Apart from his thriving business in car restorations, Dominic also has a side business. It isn’t a hobby. It isn’t something he has to do. The thrill of beating an inferior vehicle on the track isn’t enough for the turbo-seeker. He needs a bigger thrill.

Jacking trucks is that thrill.

When Brian (Paul Walker) shows up as the young hotshot on Dominic’s turf, suspicions arise. Who is this guy who no one has ever heard of to become all of a sudden the pedal-pounder’s best friend? Does he too have a secret life no one knows about?

As much as anyone would want to pin a felony against the NOS burner, Dominic is the fastest man on the road. He can race against the best in the world, drifting his way to the prize without much work other than his courage and strength to carry him across the finish line.

The life of Dominic Toretto is more than cars, though. In the bursts of octane, the crowds cheering, and the smell of diesel, lives a man who will do anything to step in for a friend and take the proverbial rap, if that is what he has to do to save a buddy. He will surrender everything he has worked hard for and give it all away, if it means he would be rescuing those who need his help.

Brian may not be who he says he is, but he recognizes Dominic’s loyalty to his friends. He understands early in his friendship with the road warrior that Dominic wouldn’t betray those who had supported him.

Have you seen The Fast and the Furious? What do you think of the character Dominic Toretto?

Turbo-charged, Nitro-boosted Brian O’Conner—the cop with the metal—exceeds all limits this week on Wednesday Warriors.

The Fast and the Furious movie franchise may not win awards, but what it lacks in praises by the academy it more than makes up in heart-pounding, adrenalin-soaked, action-packed racing sequences. The photography is a blur, the editing is jarring, and the shear thrill of its biting score burns tread marks around the competition of wannabe imposters.

Inspired by article focusing on street racing in the 2000s, The Fast and the Furious torched the box office, raking in $207 Million on a production budget of $38 Million. It shot to #1 throughout North America in 2,628 theaters on opening weekend. Even then, the film had the markings of a juggernaut series few would reminisce in disputing.

Among the players stands Dominic Toretto (Vin Diesel), a bulk of a man tearing like thunder on four wheels. A hijacker. A family man. He’s the guy who the cops have been wanting to jail for a long time. Next, Letty Ortiz (Michelle Rodriquez), the strong one. She’s Dominic’s girl. She has earned a god-like status among her admiring peers as a crazed driver that no one ought to mess with.

Then, there’s Brian (Paul Walker), the cop. The guy sent in to bring Dominic to justice.

How can one describe Brian without spoiling the story? He loves the thrill of the chase. He loves speed. Give him a choice between sitting in a sandwich shop ordering tuna and cranking the juice on his NOS (Nitrous Oxcide Systems) tank—he’ll choose street racing any day of the week. He is not a cop who goes by the book.

Torn by his allegiance to the police force and his newfound friendship with Dominic, Brian searches for a way to breach the boundary between duty and honor. Falling for Dominic’s beautiful sister Mia (Jordana Brewster) was not in the plan. Yet, neither was burning dust in one high-speed contest after another.

Eventually, Brian questions his abilities and weighs the consequences against losing the one thing that drives him. Respect.

[Author’s note: The first time watching The Fast and the Furious I remember how actor Paul Walker seemed like the everyman. His boyish grin and stellar gaze certainly captured the attention. When I heard of his passing on November 30, 2013, I didn’t know what to think. I was still recovering from the shock. I eventually learned Walker was the passenger that fateful day of the accident that had taken his life. Reports stated he died instantly. I still can’t believe he’s no longer with us.]

Have you seen any of The Fast and the Furious movies? What did you think of Brian?

Super charged, super fast, amped up on speed—Letty Ortiz—the babe with the attitude runs wild this week on Women Who Wow Wednesday.

Let’s face it, The Fast and the Furious movie franchise does not win awards, but what it lacks in praises by the academy it more than makes up in heart-pounding, adrenalin-soaked, action-packed racing sequences. The photography is a blur, the editing is jarring, and the shear thrill of its biting score burns tread marks around the competition of wannabe imposters.

Inspired by an article focusing on street racing in the 2000s, The Fast and the Furious torched the box office, raking in $207 Million on a production budget of $38 Million. It shot to #1 throughout North America in 2,628 theaters on opening weekend. Even then, the film had the markings of a juggernaut series few would reminisce in disputing.

Among the players stands Dominic Toretto (Vin Diesel), a bulk of a man tearing like thunder on four wheels. A highjacker. A family man. He’s the guy who the cops have been looking for a long time. Next, Brian O’Conner (Paul Walker), the cop. He’s the guy sent in to bring Dominic to justice. Then, there’s Letty (Michelle Rodriquez), the strong one.

How can I describe Letty without giving up the whole story? She loves speed. And she loves the thrill of the chase. Give her a choice between staying at home watching the kids and cranking the juice on her NOS (Nitrous Oxcide Systems) tank—she has no trouble playing with the big boys and their cars. Homemaker status is so not her.

Playing Dominic’s love interest, she compliments his brazen risk taking with her own brand of gambling. Her street racing status flourished in her teens, carrying her to a god-like status with her admiring peers. Nothing Dominic can do that Letty can’t match. They are equals on every level. The perfect pair of crazed drivers no one should mess with on the road.

Is she tough? Yeah, you can say that. Let her tell you in her own words:

Letty: You want a piece of ass? go to Hollywood Boulevard. You want an adrenaline rush? that’ll be two large.

Is she lighthearted? You can say that too:

Letty: [to Dom] You look a bit tired. I think you should go upstairs and give me a massage.

What does Dominic’s sister think of her?

Mia: Letty grew up just down the street. She was into cars since she was like ten years old. Dom always had her attention. Then she turned sixteen…
Brian: And she had Dom’s attention.
Mia: Yeah, it’s funny how that works out.

A guru mechanic. A bona fide tough girl who takes no flack from anyone. Letty would make an excellent warrior, fighting alongside in a zombie apocalypse.

Nice to dream, isn’t it?

Have you seen any of The Fast and the Furious movies? What did you think of Letty?